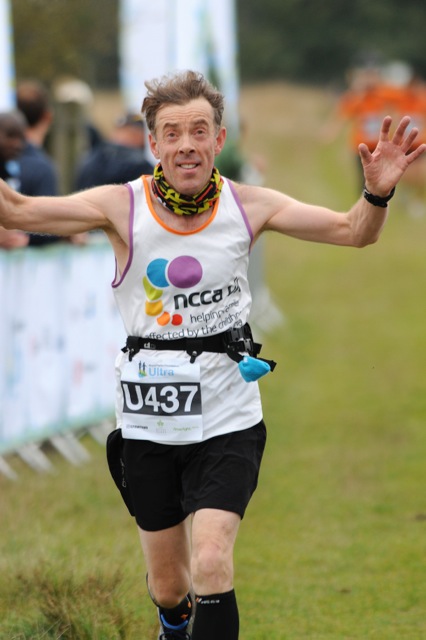 Having come back to running and marathons five years ago after a 25 year break, Tom Hooley took part in the Royal Parks Ultra 50km on October 12th.  He arranged a place via the neuroblastoma charity NCCA UK, which helped save the life of a little girl now at St Edmund’s School, where Tom teaches, and then set about raising money and putting in the training mileage.  He prefers to run only 2-3 times a week, making the best of long back-to-back runs each weekend and then doing military fitness and resistance training midweek to keep core and body fit.  Add, when possible, a more-serious-than-social Harriers’ Thursday run with the ‘geriatric fast group’. (Blame Craig for that description!)  His longest back-to-backs in the last two months pre-race were 10+11 miles and 13+14 miles, with a short taper before tackling the route of the sadly discontinued Green Chain navigational marathon in SE London, with a friend for company over the 27-28 miles, and including a 30 minute pub stop on Plumstead Common.  Here a very generous landlord and customers saw his NCCA charity vest and chipped in generously.  The final month leading up to the ultra-race was spent first resting, then running medium-distance mileage, with the last quarter of some runs done at a faster pace for variety and interest.

On the day of the ultra Tom says he had to stay focused on keeping the pace right down to 9:30 min/mi in order to stay fresh and avoid hitting the wall in the later stages, when the pace would otherwise seriously start to falter.  The route took in Hyde Park and finished in Bushy Park at Teddington. In between, a lot of the route followed the south bank of the Thames, with forays into three other royal parks.  A funny moment was when a toddler picked up armfuls of autumn leaves and threw them at him with a gleeful cry!

Tom hates gels and so he relied on peanut butter sandwiches, crisps, and raisins for energy through the event.  The last 50 minutes between full marathon and 50km finish were hard but Tom soon felt OK again, meeting his marathon running buddy Helen at the finish for the marquee meal laid on by Royal Parks and taking a good walk round Bushy Park to keep from seizing up before the drive home.

Any plans for another ultra?  A bit early to tell… maybe Downslink 38 miles next October, where the snack stations have real party food!

With the help of generous donations the target funds for charity (£1,000) were easily reached – in fact exceeded by a £600 margin.  Finish time for the race was 4:56:48 chip time, with a position of 122nd out of 334.  A consistent pace for a first ultra, and within Tom’s target of five hours.